Three False Convictions, Many Lessons:
The Psychopathology of Unjust Prosecutions

A new perspective on the roles of psychopathology, confirmation bias, false confessions, the media and internet (amongst other causes) of unjust accusations. 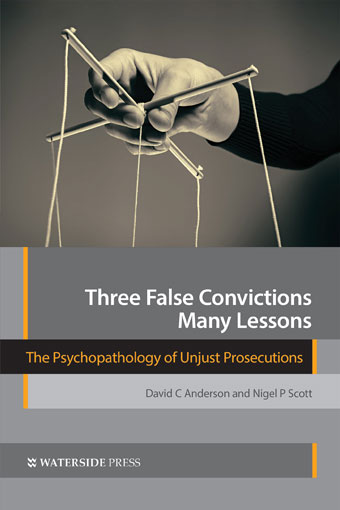 David Anderson and Nigel Scott supported the campaign to free Amanda Knox and Raffaele Sollecito who were falsely accused, initially convicted and later exonerated in connection with the murder of Croydon student Meredith Kercher. The crime took place in Perugia, Italy in November 2007 and one man, Rudy Guede, remains convicted. There is no credible evidence that implicates anyone other than Guede.

The case was obsessively covered by the media and was keenly followed worldwide, particularly in Italy, the UK and the USA. Prosecution spin and manipulation by the media moulded the public’s view. In “Three False Convictions”, the authors dig beneath the surface of this and two other cases and pose important questions about the ways in which justice can be denied.

Miscarriages of justice may have many contributing factors. Most of them are preventable. Justice has evolved in a haphazard way, originally without regard for science or psychology. Investigators, prosecutors, judges and juries are frequently fallible, sometimes malicious and occasionally psychopathic in their actions. Journalists and editors may conspire to assist and compound injustice for financial reasons. The public can be influenced by confirmation bias and schadenfreude.

The book analyses injustice through the prism of three murder cases, one Italian, one British and one American. One thing all the cases have in common is that they began with incompetent investigations which inexorably led to the arrest of the wrong people. The flaws in procedure are picked apart and the book concludes with suggestions for improving the delivery of justice and reducing the possibility of error.

By studying these high profile cases, those of Amanda Knox and Raffaele Sollecito (Italy), Stefan Kiszko (UK) and Darlie Routier (USA) – the authors show that motive forces are a mind-set in which psychopathy (what they term ‘constitutional negative empathy’) may be present and the need for investigators to reinforce an initial crime theory or lose face plays a large part.

Darlie Routier is still on Death Row in Texas despite overwhelming evidence that her conviction for killing her own child is false, whilst Knox, Sollecito and Kiszko have been vindicated by the highest judicial authorities and telling evidence. The authors show how and why unfounded rumours still persist in the Knox/Sollecito case and advance a new theory that the Routier killings were the work of a notorious, now deceased, serial killer.

A stunning response to the problem of wrongful convictions

This is a well laid out and yet very readable book for both experts and laymen. It unwraps a perspective and a solution to an alarming and growing problem that is new, unique and truly brilliant.

I highly recommend this book.

Read full review on Amazon US

A fascinating and challenging book

This is a fascinating and challenging book, compiled with scholarly authority and assurance by a former professor of medicine, David Anderson, and a writer, Nigel Scott. They examine a criminal case in each of three separate jurisdictions, namely England, Italy and Texas.

From the dark side of our souls

An essential look at how confirmation bias, schadenfreude, conspiracy theory, projection, scapegoating, mob anonymity, and the manipulation of empathy cause catastrophes in the criminal justice system.

Read review on Amazon US